You are here: Home / Dynamics GP / Which Security Tasks provide access to a particular GP window

So, Each User will have one Role or Many Roles, Roles again have one or many security Tasks. Mostly, we land up having each user mapped to several security Tasks. Sometimes, It would be difficult for us to ascertain which security tasks are allowing access to a particular GP window. Or sometimes, we think we did everything to grant access to an user and the User in turn comes back saying he is getting a security access denied error. In these types of scenarios, I now rely upon the Security Debugging Tool. Earlier, it used to be a nightmare for me trying to find which task is allowing access to a particular window or which task is needed to be marked to allow access to a particular GP window until I started using this Tool, many Thanks to David Musgrave.

Now, How does the Security Debugging Tool help in finding which security task is allowing access to which window. I’ll illustrate the same below 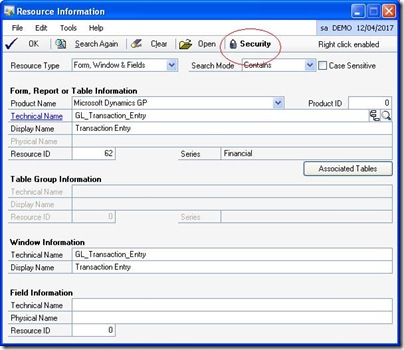 Here in this window, when I want to view the security information for General Entry window, I’d first unmark the case sensitive option, change the search mode to Contains, then enter Transaction Entry in Display Name and hit Tab that automatically fills the fields in the window. Now, I click the Security Tab that will open the window below 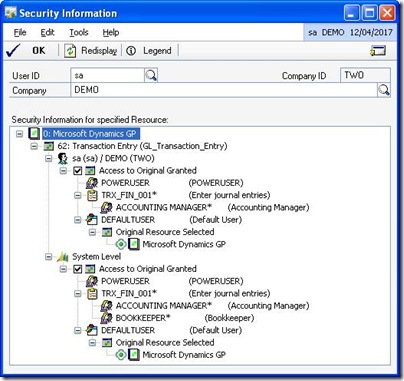 In the above window, I can very much identify which security Task is allowing access to the General Entry window including the security Roles information. This eases my job in terms of assessing the security for each window whenever I need.

Support Debugging Tool is available for download in partner source. There are other blog posts related to the same subject.